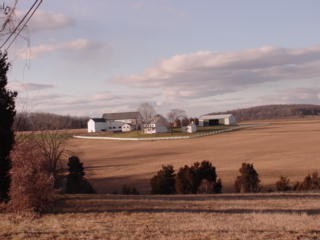 The name of Nockamixon is of Indian origin (the place at the three houses). On the back of the petition to the court, asking to have the township organized, is written the following couplet:2

As rocks in Nockamixon mate the skies,
So let this town to Nockamixon rise," 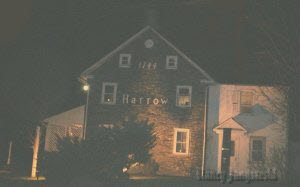 The village and tavern were called_In coaching days it was described in mail stage advertisements as located "at the end of the river road," and was a regular stopping place for the Philadelphia and easton stages. Harrow from the fixture of a harrow on the tavern sign board. The inn building dates from around 1720, the first innkeeper was probably John Wilson, grandson of trader Ralph Wilson.

BUCKSVILLE_One of the earliest of the villages founded in the township. Nicholas Buck, whose father arrived from Germany around 1752, was a wheelwright by trade. He settled in Nockamixon in 1792, purchasing 64 acres including the site of Bucksville. It became a thriving German community with a blacksmith shop and a large stone house, which today is a bed and breakfast known as the Bucksville House. Local history has it that the hotel was a speakeasy during Prohibition.

REVERE_Jacob Buck, Nockamixon Township tax collector, established the Sorrel Horse Inn in what would become Revere around 1800. He sold the inn to his brother John around 1818, who replaced the log inn with a substantial stone structure. Later John Rufe, son of George, owned and operated what became known as Rufe's Tavern. George had purchased 176 acres in the area in 1798.

The original building burned in 1850 , was rebuilt with the store by William Rufe, destroyed by fire in 1918. Jacob Black was the landlord at the time, and Harry Kiefer was the owner of the store. It was later rebuilt; the hotel being then known as the Hotel Paul Revere. Fire destroyed that building in 1959 and was not rebuilt.

FERNDALE_Formerly known as Rum's Corner because of the distillery in the area. The present day Ferndale Inn building dates back to pre-1827, as it was listed then as part of the Michael Meisser estate. Michael Meisser was a settler, and owned land on the hill above Ferndale prior to 1753. The Center Hill Schoolhouse, now a private residence on Center Hill Road near the township building, was part of that tract.

KINTNERSVILLE_Largest community in the township. Jacob Froelich of Bethlehem was the first owner of land in the village. He purchased 101 acres in 1743 from Thomas and Richard Penn. In 1749 George Gintner (Kintner) settled in the hills of Nockamixon Township. After serving in the Revolutionary War he entered the pottery business. He sold supplies to the Durham Iron Furnace until it blew up in 1792, after which he left the area.

The village of Kintnersville was named for the prominent German family of Kintner, a race of fighters and politicians. Although probably coming from the same province in Germany, the immigrant Kintners seem to have entered this country through different ports. The name was spelled several ways, commonly Gunter, Guntar, Gunther, and Gunther, changed by some of the family branches to Kintner after arrival in this country. The ancestor of the Bucks County Kintners seems to have been Georg Gunther, who arrived in Philadelphia on the ship Chance, Captain Charles Smith, in 1763.3

NARROWSVILLE_was a small hamlet at the lower end of the narrows on the Delaware River. The narrowsville Hotel was established in 1820, and was a stagecoach stop on the Easton-Morrisville Line. It was also a stop for canal barges in the mid to late 1800s, and had a blacksmith shop and stables alongside. The hotel, now known as the Indian Rock Inn, is sheltered at the base of the Palisades cliffs. The Palisades cliffs are home to rare species of alpine plants and have been studied by many eminent botanists.

St. Luke's Nockamixon . . .The church began in a log structure in 1761. Incorporated in 1763. In 1804 the Lutheran congregation approached the local reformed congregation, and the Nockamixon Union Church was formed. The new Union Church worshiped in a building on the present site of St. Luke's Lutheran church on Church Hill Road in Ferndale. 470 Church Hill Road
PO Box 67
Ferndale PA 18921
610.847.5630
lkferndale@epix.net http://www.engageinfaith.org

Although it is located in close proximity to St. Luke's Evangelical Lutheran Church, the cemetery

is a public non-profit cemetery available to all persons, regardless of race or religion. Donations of help, use of equipment and materials, legal experience, as well as memorial contributions are greatly appreciated.

St. Joseph's Marienstein . . . Thanks to the efforts of Father Henry Stommel, pastor of St. John the Baptist Church in Haycock Township from October 7, 1871 to November 19, 1875, that St. Joseph's on Marienstein Road was built. St. Joseph's was a mission of St. John's Roman Catholic Parish, Haycock.

Nockamixon Union Cemetery on Church Hill Road in Ferndale was incorporated on December 3, 1873, and continues to stand as a final resting place for this area's forefathers, their descendants, and many others as northern Bucks County has continued to grow. Two additional land areas have been added over the last cent

*INDENTURE: 1861 indenture was made for a transaction between Isaac and Elizabeth McINTIRE and Jacob MEYERS, all of Nockamixon Township in Bucks County, PA. Jacob Meyers paid Isaac and Elizabeth McIntire four hundred dollars for land adjoining that of "George SHIVE, Christian PHILLIPS and others." The land that was sold included twenty-one acres "being the same premises which Joseph S. ELY Esquire Sheriff of the County of Bucks aforesaid levied upon and took in execution as the property of Francis (Thome?Thomo?Thoms?) and sold under a writ of bendictioni tested at Doylestown December 6th AD 1858 ..." Source

PERSUANT to an order of the Orphans' Court of Bucks county, will be sold at public sale, on the premises, in Nockamixon township, on Saturday the 28th of October next, all the Real Estate of George Sheets, dec'd, consisting of a tract of land, containing 50 ACRES lying on a public road leading to Frenchtown, adjoining fields of Samuel Ulmer, Frederick Stone, and others.
The improvements are a house, well of water at the door, barn, orchard, &c. There is also a good proportion of meadows and woodland. Sale to commence at 1 o'clock P.M. Conditions by FREDERICK STONE, Adm'r. September 27, 1843

YouTube - Delaware Canal Towpath Easton to Nockamixon Cliffs PA ...
Your browser does not currently recognize any of the video formats available. Click here to visit our frequently asked questions about HTML5 video.

With malice toward none; with charity for all; with firmness in the right, as God gives us to see the right, let us strive on to finish the work we are in, to bind up the nation's wounds; to care for him who shall have borne the battle, and for his widow, and his orphan - to do all which may achieve a just and lasting peace among ourselves and with all nations.